Situated opposite Hyde Park at Number 11 Knightsbridge where the famous jazz club Pizza on the Park used to be (oh the memories!) and tucked away between the equally opulent ‘grande dame’ hotels The Lanesborough and The Berkeley, the 1920s townhouse is the new contender amongst London’s luxury hotels.

Now owned by Arab Investments Ltd, the hotel was named after Sir Arthur Wellesley, the first Duke of Wellington, a fine military leader who served as the Prime Minister of Great Britain twice between 1828 and 1834, and later as leader of the House of Lords

The beautifully restored and lavishly refurbished hotel is the result of the award-winning Fox Linton Associates who transformed and crafted the interiors of the 36 suites and bedrooms residence with a modern Art Deco feel and sumptuous finishes.

The six-floor hotel is comparatively smaller compared to the more imposing aforementioned hotels but still offers its residents traditional glamour, contemporary luxury and an uncompromising service. Where else do you get a complimentary 24-hour butler service and the courtesy of a Rolls-Royce drop off service within a 1.5mile radius!

The existing, historical aspects of the current building – above the infrastructure of the Piccadilly Line of the London Underground –  were preserved. The orignal facade decorated with stone and faience was retained but a new one was added and constructed this time with brickwork and slate.

A-Gent of Style was given special access to the hotel especially the suites and penthouses but this first part will focus on the ground floor and its common areas.

As soon as you step in past the heavy bronze entrance doors, you know that you are dealing with opulence and excellence. A long, colonnaded, vaulted corridor bedecked in marble welcomes you and invite you to discover the interconnected rooms on either side. Everything here has been custom-made and the craftmanship and attention to detail are second to none: the glitzy crystal ceiling lights, the bespoke art work on the walls, the big stud-patterned desks with leather, marble and metals, and the etched, mirrored arcades above the walls.

But what is special about The Wellesley is that the common areas are relatively small and it hasn’t got the overwhelming grandeur some of its counterparts have. It is very much in a class of its own. For instance, there isn’t an imposing lobby and reception area as such with squads of staff milling about with suitcases or trays. It is contradictorily quite simple yet luxurious and feels very intimate and serene.

The first room on your right is the Crystal Bar which showcases a wall of the finest whiskies, armagnacs and cognacs where you can sip languorously at the wondrous 1920s-like, lit-up, glass and marble bar from the midnight-blue faux-crocodile stools. The floor is covered in Moonlight Grey and Noir St Laurent marble

The Wellesley attracts tobacco enthusiasts as it has one of the largest bespoke humidor in the UK.

On the left, you will find the dark and moody  Humidor Lounge opposite the bar which proved to be the perfect spot for us to have an apéritif the evening I visited. The look of these two rooms is very masculine, sultry and moody a bit like Claridge’s The Fumoir and has the feel of a Gentlemen’s Club. Here the deep-buttoned, Chesterfield black leather sofas and chairs complement well the imposing painting of Winston Churchill and the modern sculptural lights (or is it light sculptures?). The imposing circular blue glass chandelier is undeniably the pièce de résistance. The light fittings in the public areas were made by Dernier & Hamlyn.

There are two outdoor, covered Cigar Terraces (with rugs and art on the walls!) which provide an intimate yet spacious environment to indulge in a fine cigar. The furniture is made of teak and the upholstered in dark blue leather.

Then, on the left-hand side at the end of the corridor, guests will find The Jazz Lounge where they can enjoy a selection of high teas while listening to daytime jazz or settle back with a cocktail during the evening in an intimate, Gatsby style and atmosphere. I liked the palette of soft pinks on the chairs (leather on the seats but silk on the back; great detail) and particularly the bronze screen – I do love a screen – adorned with festoon-shaped pearl strings, mixed with the deep blue on the Gunta Stölz-esque, square-patterned carpet.

The Oval Restaurant, on the right, is an intimate hideaway which can seat up to 28 customers offering refined Italian cuisine. Once again, the room is smoothly enveloped in sugar-almond pinks found on the hand-crafted mahogany chairs upholstered with leather on the front and horsehair on the back and deep-buttoned banquettes and is replete with glamourous references to Art Deco from the sunburst-shaped, 2-toned glossy marble on the floor to the cream, fan-shaped leather panels on the walls with brass detailing, the glitzy chandelier on the circular, coffered ceiling and the concertinaed mirrored wall that reminded me of the iconic staircase at the Paris Chanel store, Rue Cambon. 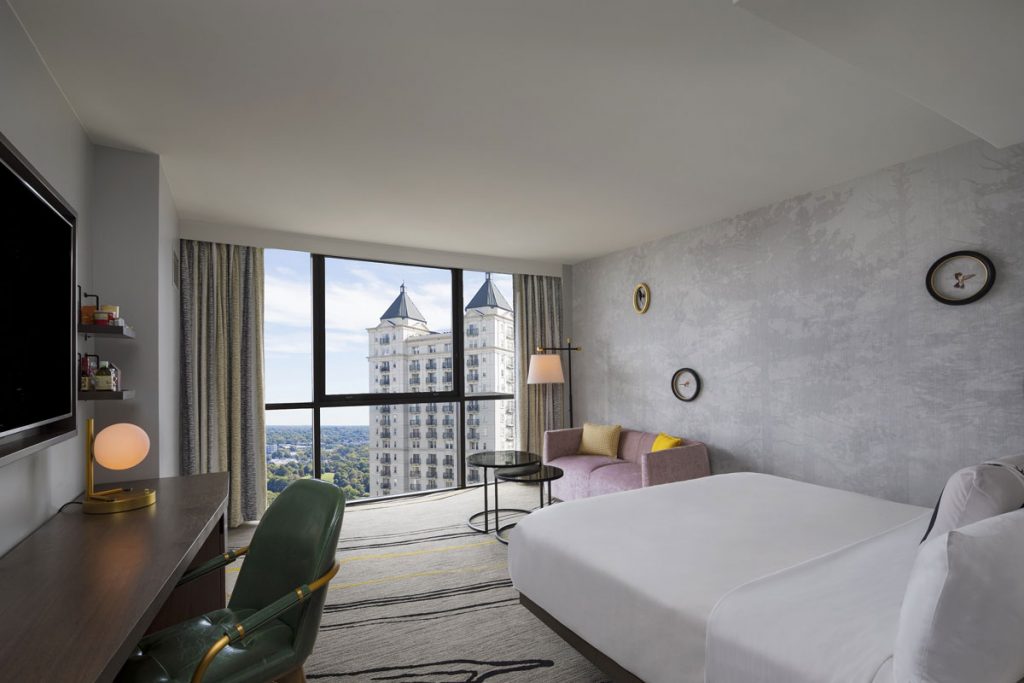 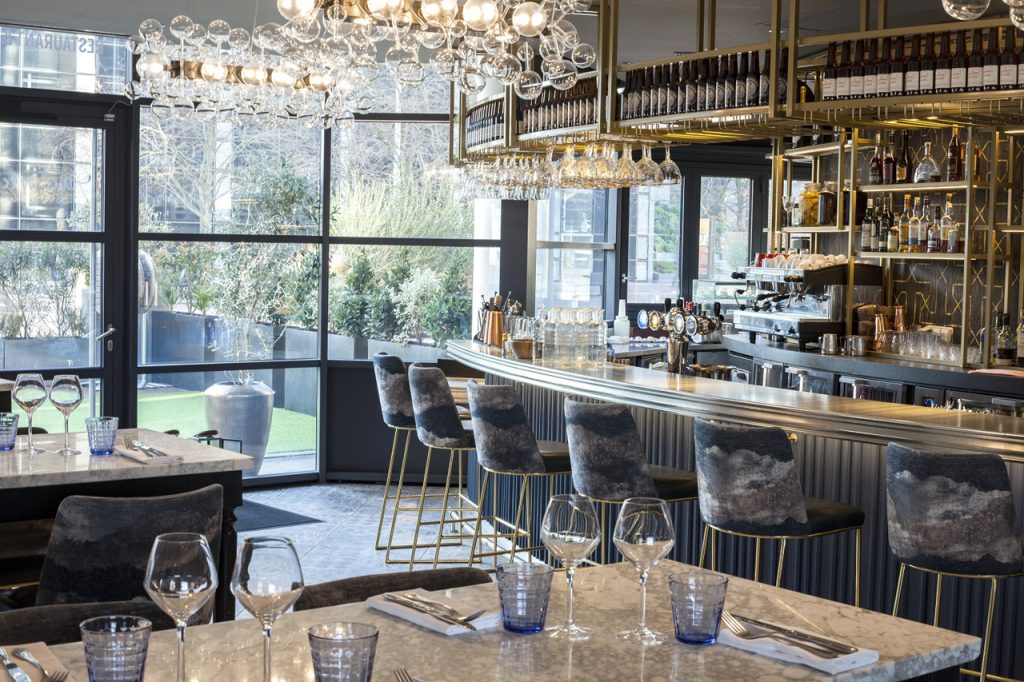 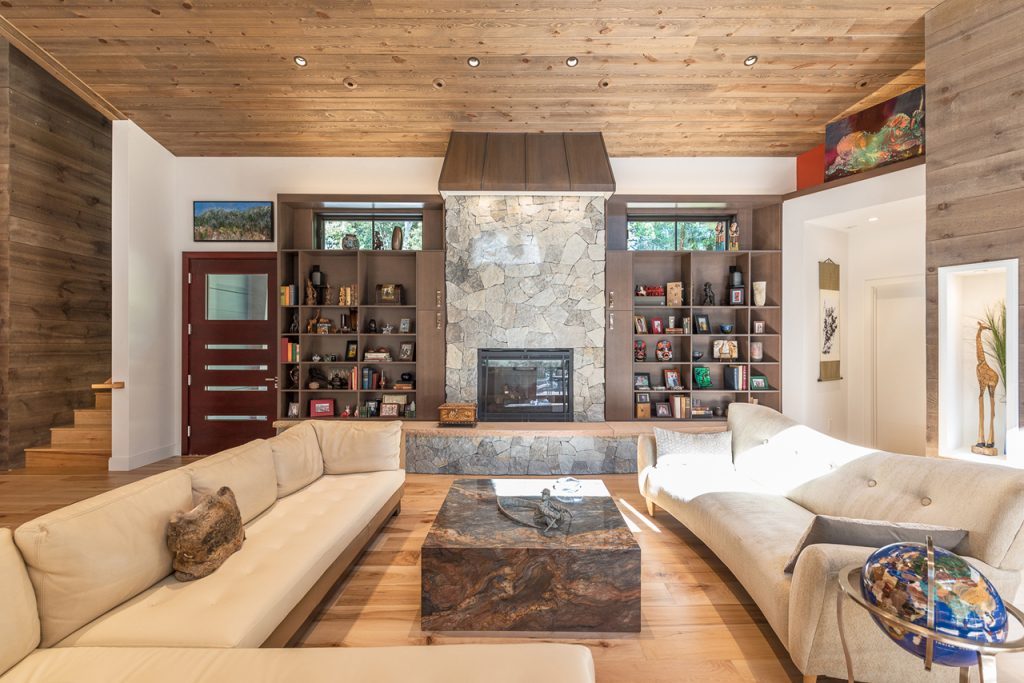