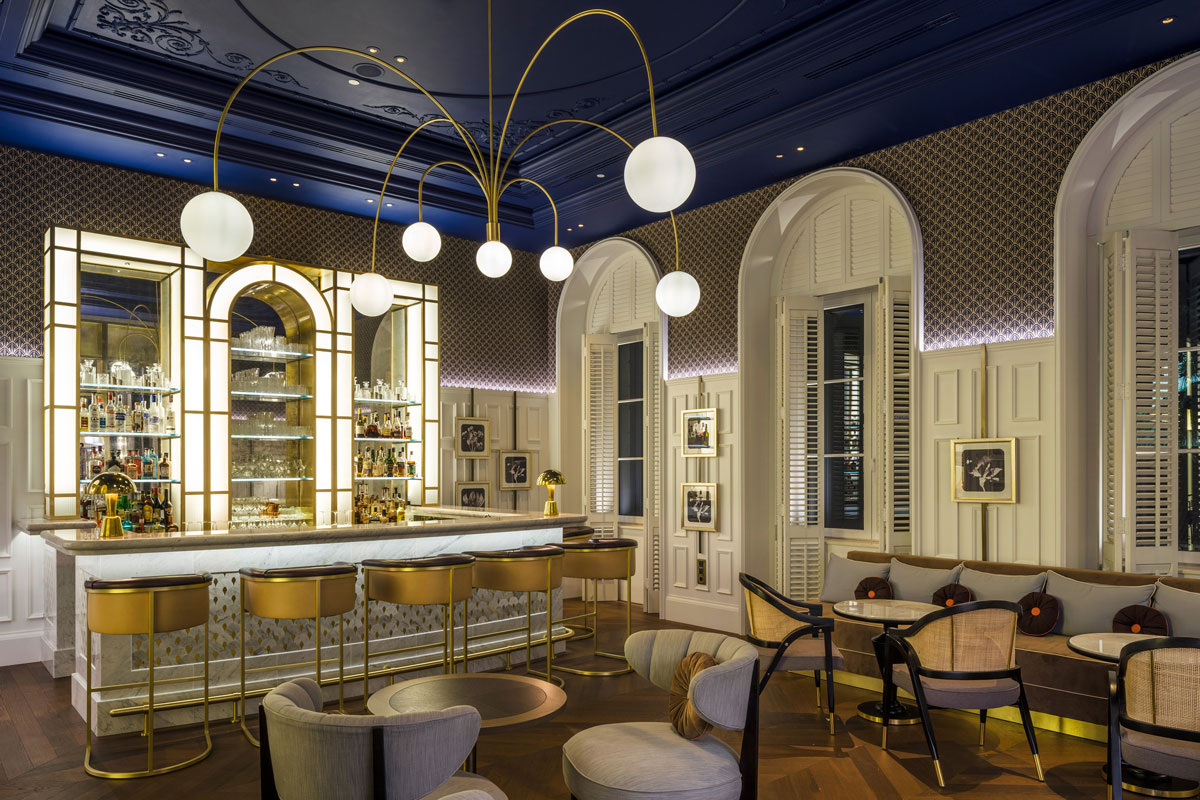 This week’s instalment of the #SBIDinspire interior design series features luxurious, golden age glamour for the Hilton’s Imperial Hotel design in Dubrovnik. The Hilton Imperial Dubrovnik was originally built in the 1890’s, situated just above the UNESCO World Heritage site of Dubrovnik’s old town. Originally named ‘The Grand Hotel Imperial’, it was an immediate hit with a French Riviera feel and the glamorous cachet of an international clientele. The hotel was shelled during the Yugoslav war and subsequently brought back to life in 2005, when it was rebuilt in its original style. However, costly building works meant that the interiors weren’t the main priority at that time and were primed for a completely new treatment this time round.

When Goddard Littlefair was first commissioned, the hotel was already very well established and incredibly popular, with a wonderful location overlooking the old fort and the Adriatic. Drawing inspiration from the romance of the hotel’s former glories, the new design scheme sought to re-inject golden age glamour into one of Europe’s most historic hotels. 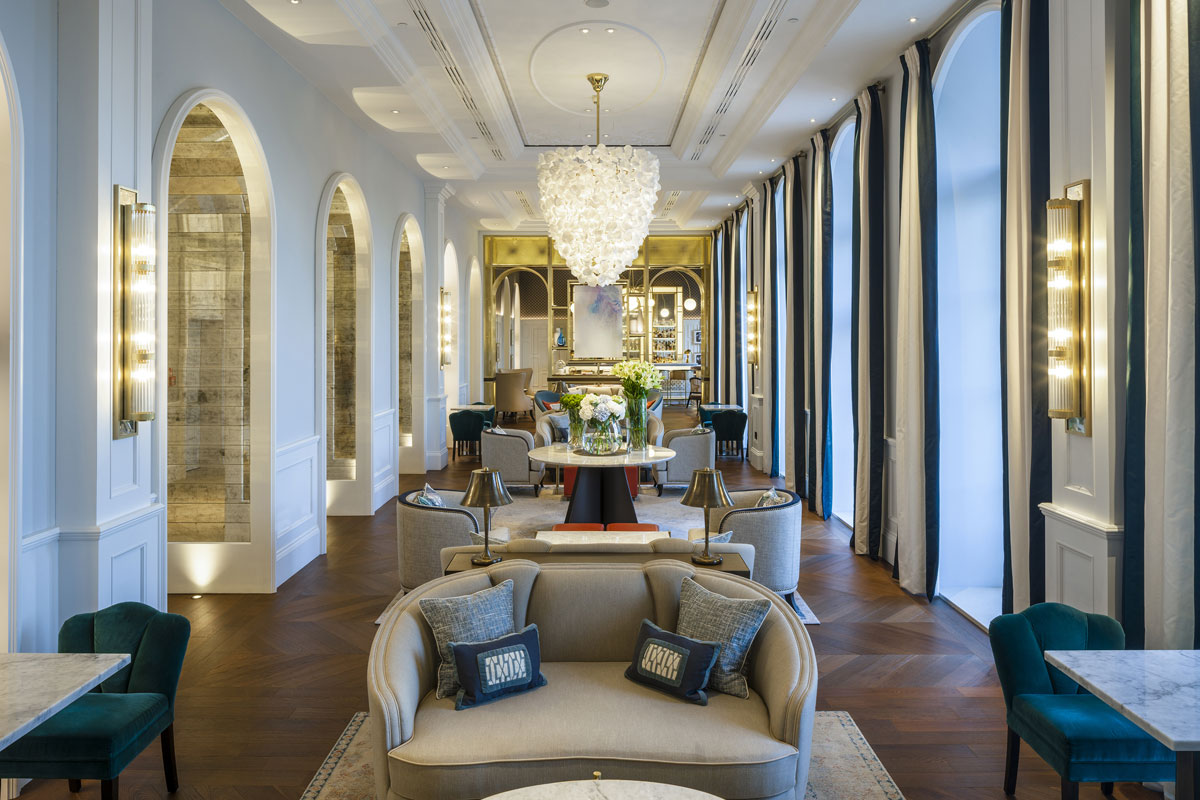 The brief was to unlock the true potential of the four-storey hotel’s spectacular location, architecture, reputation and history, in order to appeal to today’s sophisticated and cosmopolitan traveller. Goddard Littlefair was initially commissioned towards the end of 2016 for a phased set of redesign works, with the first two now completed and including the reception and lobby, The Lobby Lounge, The Imperial Bar, The Executive Lounge, all connecting and guest-room corridors and all of the hotel’s 149 standard and executive rooms and 9 suites. A refurbishment of the hotel’s existing restaurant, Porat, on the lower-ground floor, will follow in late 2019. 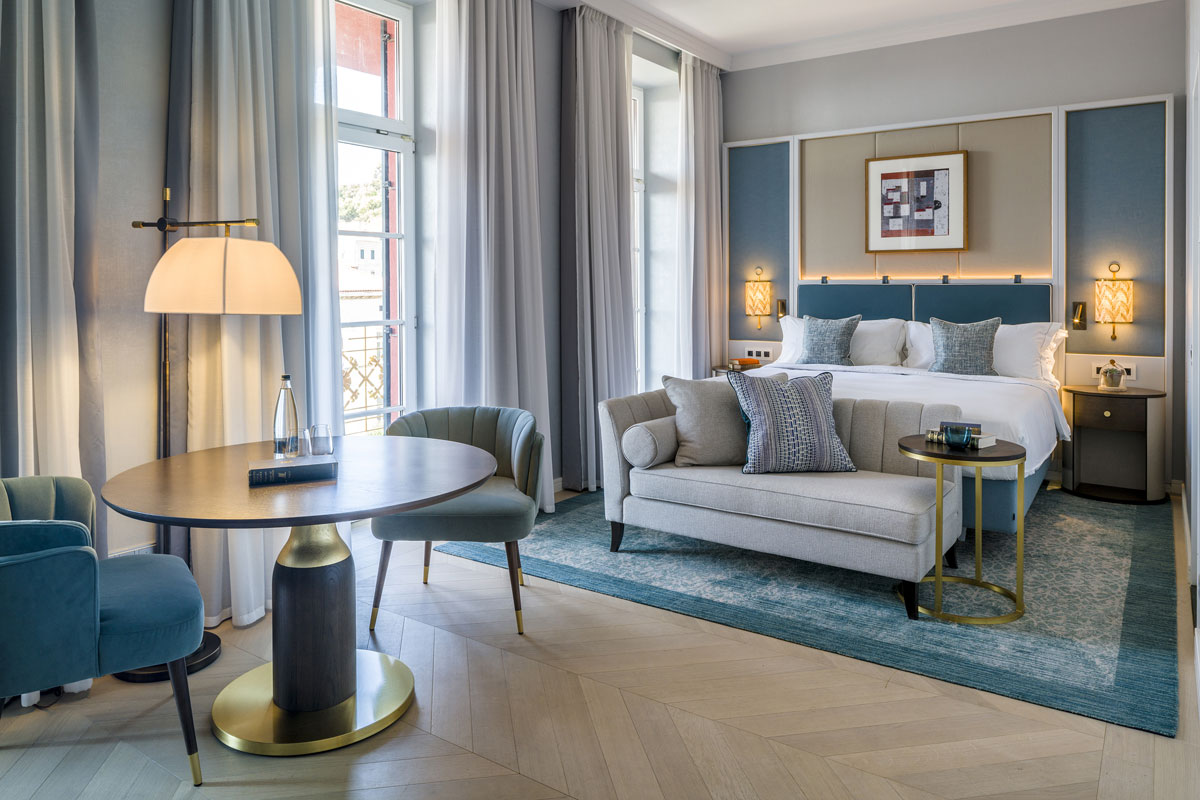 Inspiration for the new interiors was drawn from the hotel’s incredible history, in both alluding to and recreating its glamorous heritage, whilst also ensuring it had a thoroughly contemporary sophistication. This was achieved by honouring the hotel’s existing architecture and romance throughout, layering glamour into each individual space via a Riviera palette, soft detailing and a 1920’s yachting influence, whilst at the same time balancing this with clean and contemporary lines. 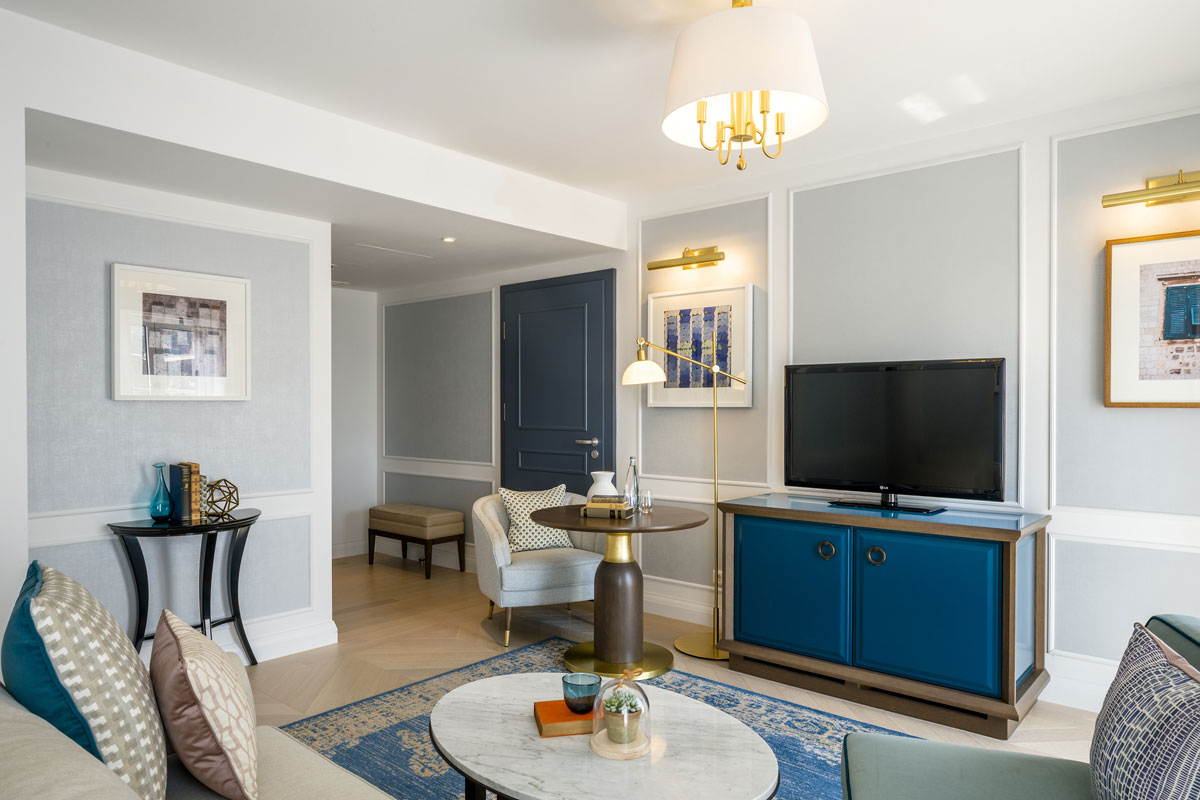 The toughest hurdle was dealing with the missing architectural quality of the existing interiors that didn’t do justice to the charming exterior. The former Lobby Lounge and Bar were connected as one continuous and vast space that lacked warmth and intimacy. By breaking up the space with the use of a bespoke see-through brass shelving unit we have created a cosier transition between the two spaces. The double-height and long Reception was also addressed with regards to the lack of a solid architectural language by breaking up the height and length of the space with painted mouldings and timber panellings. 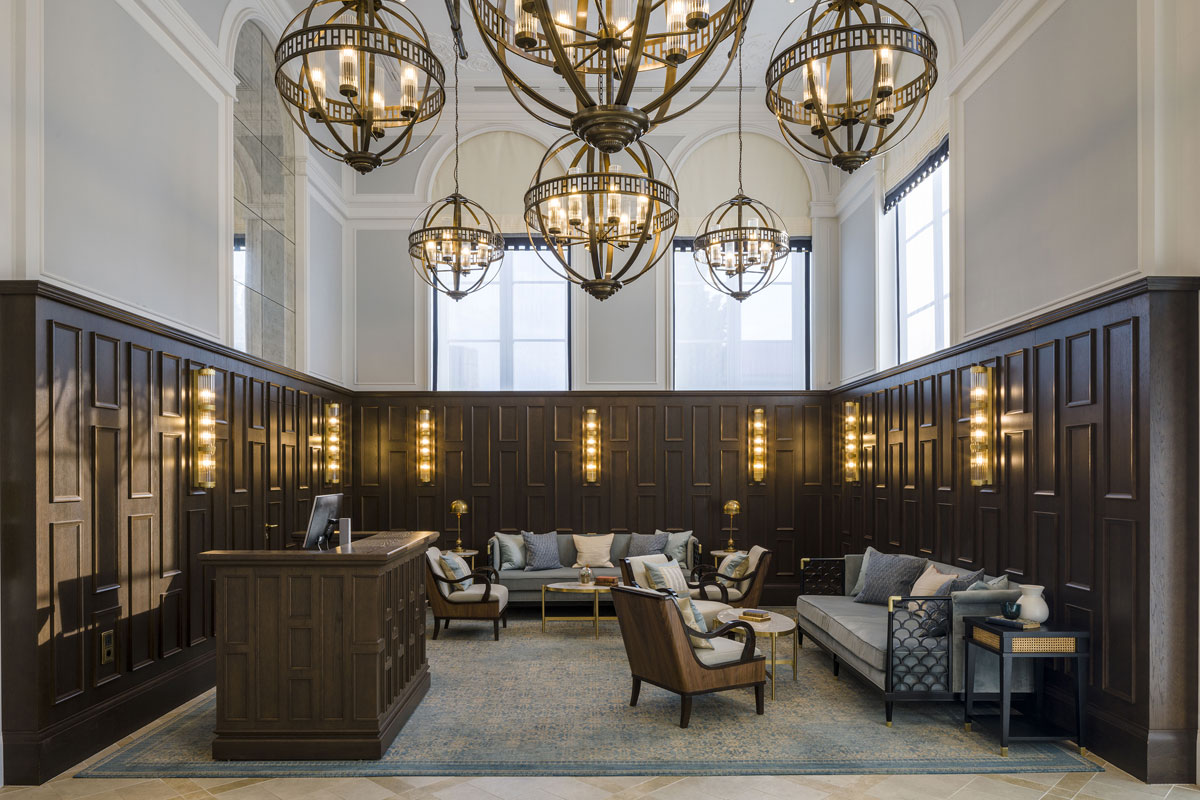 It felt like everyone was proud to be working on such a prestigious and well known historic building. From the local contractors to the joinery manufacturers, everyone involved on the project was very communicative and responsive whenever the deadlines were pressing. The quality of materials and skills involved were very high throughout the process. As well as respecting the industry standing of the SBID and the reputation of the SBID International Design Awards, it’s also a real pleasure to have our designs recognised and admired by peers! If you missed last week’s Project of the Week featuring a sleek, clean-lined kitchen design, click here to see more.

We hope you feel inspired by this week’s Hotel design! Let us know what inspired you #SBIDinspire 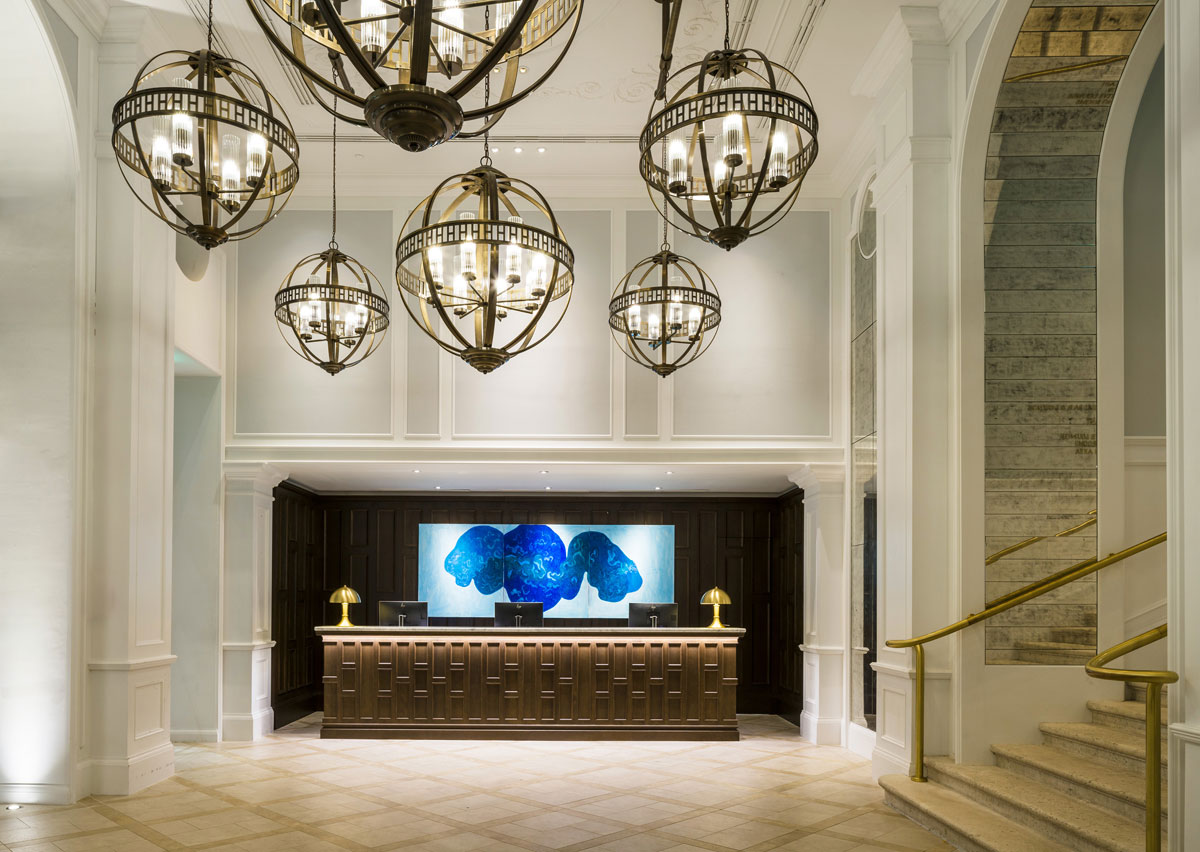 Luxurious Apartment Brings The Classic Style of Rome To Beijing